Subscribe to our newsletter and receive 25% off your order!

My Dad & Bay Rum: From Burt's Bees to Thor's Hammer 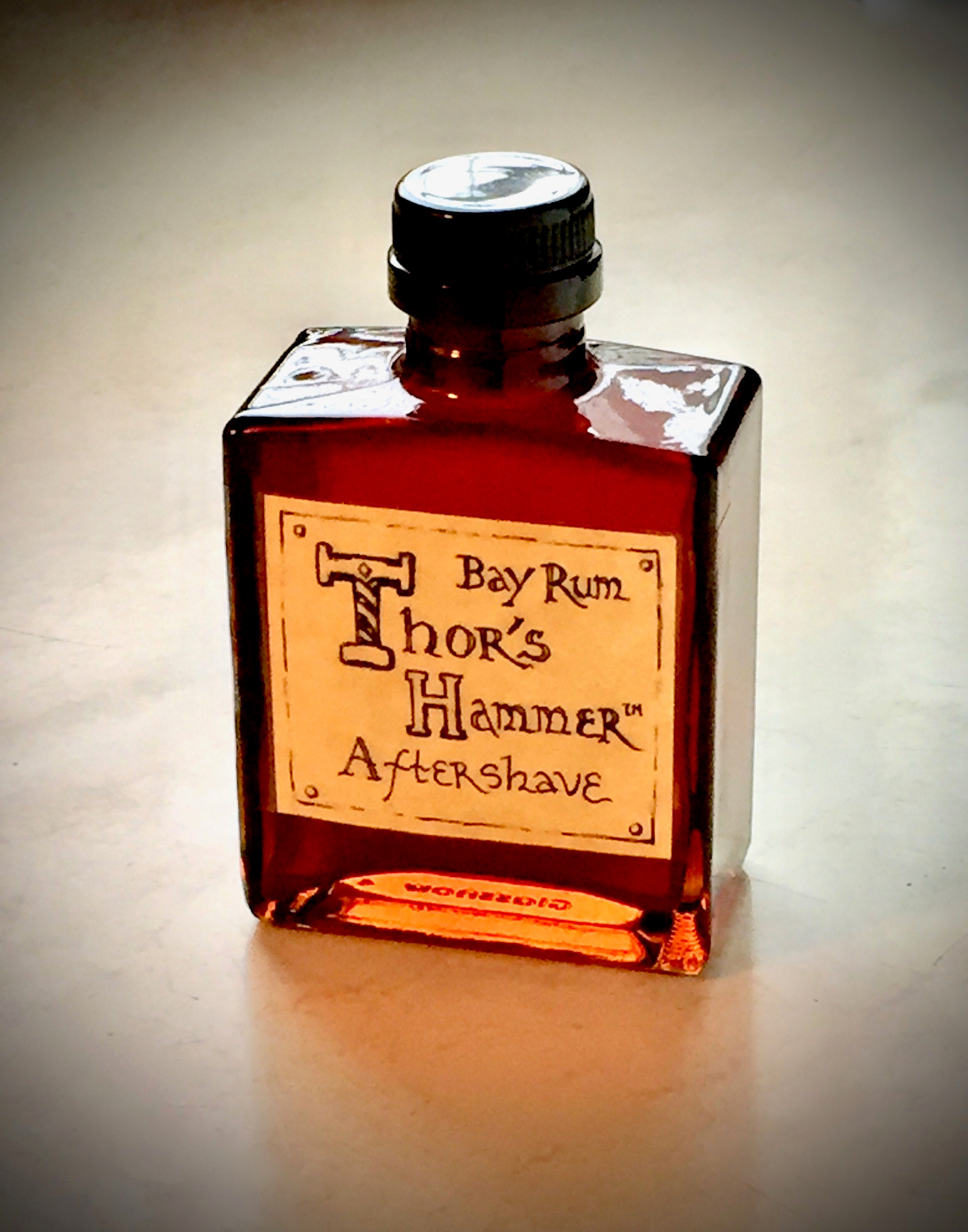 Bay Rum has a long history with sailors, rum, and bay leaves with spices and cinnamon. It has made countless men smell good. The scent was popular during WWII, but has faded since.

I also have a life long history with bay rum. I remember my dad splashing on that gold spiced liquid after shaving. He would lightly slap it on his face. I guess he smelled good because he was always popular with the ladies. Striking blue eyes and God-given dancing ability helped as well. Born in the year of the horse, my dad vouched for playing the field. During my youth I would try his aftershave on my face to be more grown up. I especially remember that burn.

Bay rum was hard to find in the 1980’s, and my mom and I would drive all over town trying to buy some for Father’s Day or Christmas. My dad was hard to buy for - damn particular is more like it - and it had to be bay rum. He never liked the slippers we got him.

Years after my father passed, I was in my late 20’s and discovered his last bottle of bay rum in his travel kit in the bathroom of my parents’ house. I tried it after shaving with my dad’s electric razor, although I prefer a blade. The good smell and slight burn brought back many memories.

Since it was hard to find bay rum, it was a blessing when I discovered Burt’s Bees Aftershave Balm, with the old hippy bum on the bottle. Or it could have been my mom who found it on some discount rack. At first I was reluctant to try it because I couldn’t relate to the full-bearded man on the label. My memory of my dad was as a working-class man with an Elvis-influenced look and slick hair. However, the scent was great and it felt nice on my face. I started using Burt’s Bay Rum when I got a job working at the airport with Northwest. My dad had worked there as well. It’s cool that I fit perfectly into his Northwest workshirts!

At that time I was moving toward natural personal care products because I found I was sensitive to artificial ingredients. After Burt’s stopped making their bay rum, I suffered through a couple of online purchases of bay rum with artificial fragrances and colors - yuck! I mean, yellow #5? Come on! I wasn’t moving towards Old Spice either. The scent never intrigued me. It smelled like baby powder, and I’ve read it was initially formulated for women.

I was sincerely disappointed when Burt’s discontinued their bay rum line. I mean, I was all in - had their shaving mug and soap and brush. I guess you can blame it on the big manufacturer that bought them up. I remember trying to make that last bottle go forever by thinning it with water. Almost all commercially made aftershaves are full of artifical colors and fragrances, so I decided to make my own.

It was not easy! The first recipe I tried left me with menthol burn to my eyes and cinnamon burn to my face. (Editor’s note: My husband is just being nice. I made the first batch of aftershave with the menthol that nearly blinded him.) (My note: It's not her fault, just the recipe we tried.) I liked how Burt’s Balm combined classic bay rum with modern, spicy patchouli and cedar, but I was looking for a fresher, cleaner feel because I always rinsed my face after applying it to calm the strong scent and thick feel. I wanted a slick, cool, refreshing aftershave with a slight, brisk, tingling embrace.

After a year of experimenting, Thor’s Hammer Classic Bay Rum Aftershave was born - at about the same time as our baby Jolene Rose. My recipe is all natural, with a foundation of heirloom oranges and true cinnamon aged in rum. During our travels in Santa Cruz, California, we discovered the best fruits and spices, which greatly enhanced the rich, spicy aroma and deep amber color. Each batch has to be fine tuned because of the natural variations among fresh oranges and real cinnamon.

My interest in Viking mythology led to the name Thor’s Hammer. Vikings were sailors (actually, pirates!) after all, so I put together classic bay rum history with the might and justice of Thor’s Hammer, like this aftershave.

I believe I have created an aftershave that my father would approve. Please try a sample of this classic scent today.

Previous Post Mission in a Bottle: Freyja's Magic Body Care for Health and Beauty
Next Post Boost You Spring Detox with Foaming Sugar Scrub for Clear, Radiant Skin
0 items in your cart